Cookie use on MRCVSonline
We use cookies to ensure that we give you the best experience on our website. If you continue without changing your settings, we will assume that you are happy to receive all cookies.
Accept Policy
Change cookie settings
Study finds that slow blinking can help owners bond with their cats 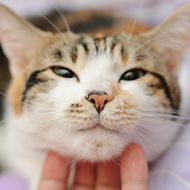 The slow blinking technique seems to make humans more attractive to cats, and generates an action popularly known as the 'cat smile'.

A study conducted by psychologists at the Universities of Sussex and Portsmouth has revealed for the first time that a slow blinking technique can be used as a form of positive communication between cats and humans.

Professor McComb said: “As someone who has both studied animal behaviour and is a cat owner, it’s great to be able to show that cats and humans can communicate in this way. It’s something that many cat owners had already suspected, so it’s exciting to have found evidence for it.”

The research team undertook two experiments, both of which were video recorded. The first experiment included a total of 21 cats from 14 different households and their respective owners. After waiting for the cat to settle in one place, the owner sat near the animal and tried both the slow blinking technique and no interaction at all.

This experiment showed that the cats were more likely to slow blink at their owners after their owners had slow blinked at them, compared to no interaction on the owner's part.

The second experiment included a total of 24 additional cats. This time a researcher from the team either slow blinked at the cat or adopted a neutral face without direct eye contact. The researcher also offered the cat their hand, to see if the animal would approach.

According to the study, the cats were found to be more likely to approach the experimenter’s outstretched hand after they’d slow blinked at the cat, compared to when they had adopted a neutral expression.

Author of the study Dr Humphrey said: “Understanding positive ways in which cats and humans interact can enhance public understanding of cats, improve feline welfare, and tell us more about the socio-cognitive abilities of this under-studied species.

“Our findings could potentially be used to assess the welfare of cats in a variety of settings, including veterinary practices and shelters.”

A new spring series of wellbeing talks designed to tackle some of the issues faced in veterinary practices is launching on Saturday (27 February). Hosted by WellVet and Boehringer Ingelheim, the talks will focus on simple, practical tips to improve personal and team wellbeing.

Six 30-minute presentations will be hosted by leading coaching professionals, including Libby Kemkaran, Adrian Nelson-Pratt and occupational psychologist professor Elinor O'Connor. The events will be streamed live on the WellVet Facebook page and can be watched back at any time. For more information, visit wellvet.com

The 2021 edition of the NOAH Compendium of Data Sheets for Animal Medicines has been published.

Published annually by NOAH, this book is sent to every veterinary practice in the UK for free. The 2021 edition includes an even larger range of products than previous years.

Chief executive Dawn Howard stated that NOAH will shortly be launching a survey for practices on the Compendiums effectiveness.

She added: "Our survey will give users of the Compendium the opportunity to say how they think we can improve it to assist them in prescribing veterinary medicines and advising animal keepers on their use. We look forward to getting your views."