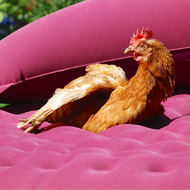 Around 600,000 households in the UK now keep domestic fowl as pets.

Chickens are the sixth most popular pet in the UK, according to a recent study.

Commenting, Jane Howorth of the British Hen Welfare Trust, said: “I’m not surprised that chickens are moving up the ranking of most popular pets in the UK, here at the charity we all know what wonderful pets our ex-commercial hens in particular make.

“Each has their own personality and charm; they are quite simply life-enhancing, and what other pet will lay eggs for your breakfast?! Best of all you don’t have to choose between owning a cat/dog and a chicken. Hens will live in perfect harmony with the rest of your furry friends.”

Since 2008, the PFMA Pet Data Report has been tracking the state of the UK’s pet population. Gathered annually during late January and early February, the data is used by government departments, pet care businesses and wildlife charities to inform welfare strategies.

This year’s report reveals that 12 million households in the UK have a pet, with the majority owning a cat (8 million ) or dog (8.5 million). Of the households asked, 28 per cent said they had or would consider owning a small mammal as a first pet.

The survey also reveals that the UK pet food market experienced slight growth in 2016 and is now worth a record £2.6bn. Eighty-eight per cent of owners said that they feed their pet a commercially prepared per food. However, 53 per cent of dog owners who feed table scraps do so daily - as do 43 per cent of cat owners.

"PFMA has a very specific role in the area of pet nutirition and this is where we educate to make sure those at the front line of pet care have all the information they need to support pet owners in providing the best possible diets for their pets," explained Nicole Paley, PFMA communications manager.

"The educational work of PFMA and the other organisations is ongoing and what is particularly unique about the pet care sector is how well those organisations come together to bring about change. PFMA look forward to this continued collaboration and achieving real results for our amazing companion animals in 2017 and beyond".

The baby girl will be named in the coming days through a public vote, and staff will carry out a paternity test during its first health check to determine the father.

Mother Heleen's first infant, Velu, was born in 2014, making this new baby only the second chimpanzee born in Scotland for more than 20 years.

Budongo Trail team leader Donald Gow said: "While we celebrate every birth, this one is particularly special because our new arrival is a critically endangered Western chimpanzee, a rare subspecies of chimpanzee."

The British Equine Veterinary Association (BEVA) is offering free membership to veterinary students. As part of a new initiative with the aim of encouraging more veterinary professionals into equine practice.

According to BEVA, less than one in ten veterinary students choose to work in equine practice. The association hopes that this initiative will provide insight into the field and the benefits of a career in equine medicine.

BEVA will be releasing a series of short videos over the next few months from BEVA Council members, explaining what inspired them to work in equine practice.